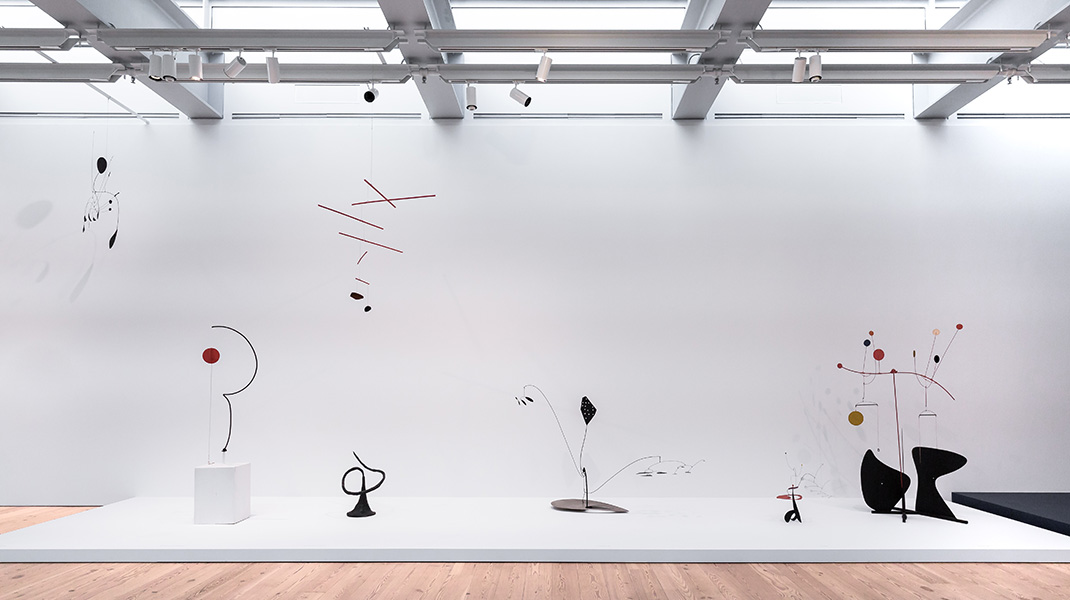 “Alexander Calder (1898–1976) is renowned for his radical introduction of movement into sculpture, a singular innovation yielding nearly endless possibilities. Deeply fascinated by dance and theater, he created motorized and wind-propelled artworks that execute a choreography of gentle rotations and bold, unpredictable gestures, and at times even produce percussive sounds. Although museums most commonly present his sculptures as static objects, this exhibition offers a unique opportunity to experience them as the artist intended—in motion. Calder’s striking vocabulary of diverse forms will be revealed through daily activations of the sculptures on view and an unprecedented collaboration with the Calder Foundation whereby rarely seenworks will be presented for one-time demonstrations. An expansive series of performances will also bring contemporary artists into dialogue with Calder as their practices interplay with his inventions.

Calder began experimenting with kineticism in the 1920s while living in Paris, where he developed close associations with leading European avant-garde artists, including Marcel Duchamp, Piet Mondrian, Edgard Varèse, and Fernand Léger. In 1931 Calder invented the mobile, an entirely new mode of sculpture. The term was coined by Duchamp—in French, mobile is a pun that means both “motive” and “that which moves.” Designed with carefully balanced components of wire, metal, and wood, each mobile performs its own set of movements, enacting an infinite series of potential forms. Calder famously stated, “Just as one can compose colors, or forms, so one can compose motions.” In tandem with his kinetic works, he also made stabiles, sculptures that while stationary nonetheless convey a heightened sense of implied movement through their multifaceted compositions.

Calder often used the term disparity to describe the independent and even contradictory nature of his works’ constituent elements as they coalesce into their complex wholes. Calder: Hypermobility draws on disparity as its organizing principle, juxtaposing contrasting works from different periods to illuminate the incredible variation and ingenuity of Calder’s art.” —  Introductory Wall Text