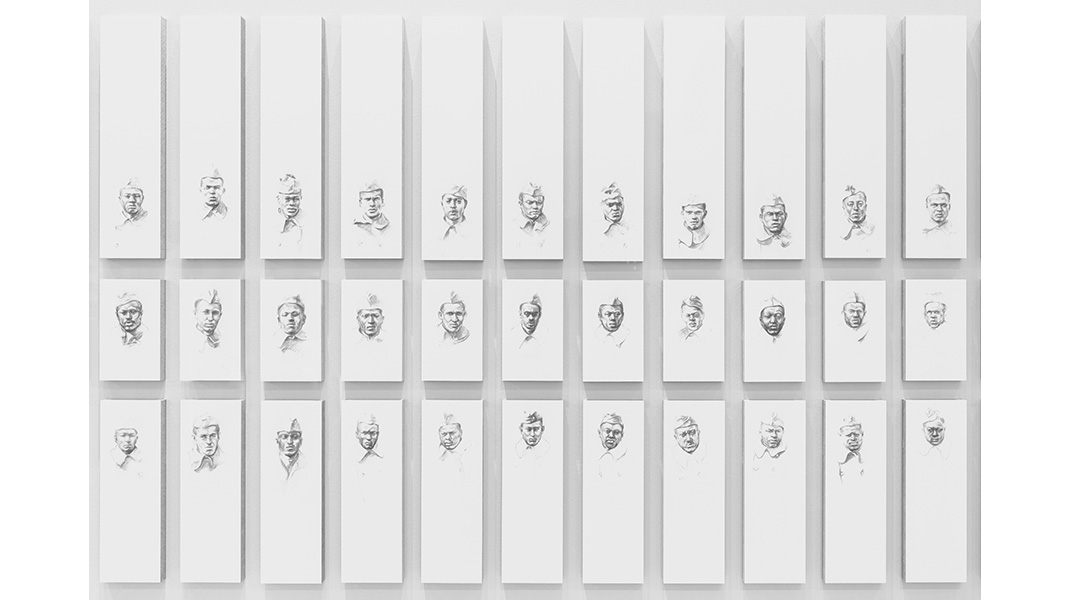 “To honor the centennial of America’s involvement in World War I, the New-York Historical Society presents a special exhibition examining this monumental event through the eyes of American artists. World War I Beyond the Trenches explores how artists across generations, aesthetic sensibilities, and the political spectrum used their work to depict, memorialize, promote, or oppose the divisive conflict.

“Americans All” Celebrating and Mourning Posters

Debra Priestly (b. 1961). somewhere listening: Company B, 365th Infantry Regiment, 92nd Division, A.E.F. 1918- 1919, 2014. Charcoal pencil on paper mounted on archival board, 28 x 284 x ½ in. (overall). Pennsylvania Academy of the Fine Arts, Philadelphia, Museum Purchase, 2017.4. This installation depicts 212 soldiers in a photograph from the artist’s grandmother’s collection. The images appear as a memorial to this African American unit, which included Priestly’s great uncle.

World War I Beyond the Trenches, the New-York Historical presentation, was curated by independent curator Robin Jaffee Frank, with Mike Thornton, New-York Historical’s associate curator of material culture. WWI and American Art will next travel to the Frist Center for the Visual Arts, Nashville, Tennessee.